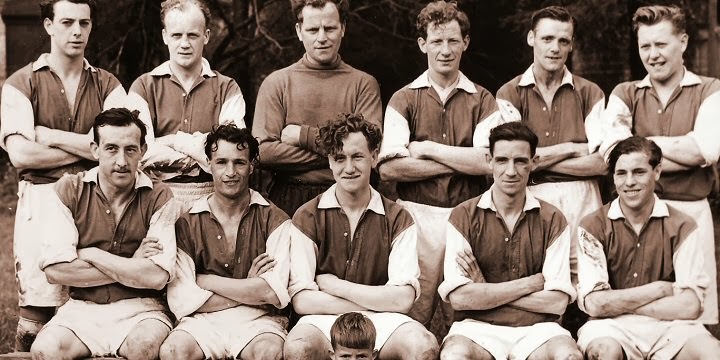 Formative Years
Prior to the Second World War there were several teams that competed locally using the Whyteleafe name notably Whyteleafe Junior FC and Whyteleafe Albion. Whyteleafe Albion competed for many years but the club folded several years before the Second World War. A new club, simply called Whyteleafe FC, was formed in 1946. The new club commenced Junior football as members of the Caterham and Edenbridge, the Thornton Heath & District and the Croydon Leagues. Of these early years season 1951/52, was the most successful, with a strong 'Leafe line-up becoming Thornton Heath League champions, winners of two local charity cups and runners-up in both the Surrey County Junior Cup and the League Cup. Two years later they progressed to the Surrey County Intermediate League (Eastern Division) and were Division 1 champions in 1955/6. 1958 saw the significant transition from 'Junior' to 'Senior' status and entry into the Surrey Senior League. This change required the club to move from the New Barn Lane School ground which was inadequate for senior football and with a dynamic committee under the leadership of Secretary Dick Baxendine, the club purchased approximately four acres of farmland in nearby Church Road, where the club still play today. The original stand at Whyteleafe's old ground is still used by Kenley Primary School and is clearly visible from Valley Road about half a mile north of the current ground.
New Ground, New Start
Play commenced on the new ground in season 1959/60, and in the early sixties the club gained minor rewards with the reserve team playing under the guidance of former Crystal Palace hero Roy Greenwood. The next success came as the 1960s drew to a close which saw 'Leafe as Surrey Senior League Champions and runners in the League Cup. In the 1970s the floodlight training area and stand were built and in 1975 the club moved into the London Spartan League before joined the Athenian League in 1981. The main pitch floodlights were installed and the dressing rooms were moved to their current location in the early 1980s. In the 1984/85 season, a league re-organisation saw the club enter Division Two South of the Isthmian League. In November 1986 Steve Kember joined the club as Manager having been associated with the club for some years previously when with Crystal Palace with whom he had won considerable success. In two successive seasons Kember engineered the club through to the third Qualifying round of the FA Cup on two occasions. A highly successful in 1988/89 saw the club win promotion as runners-up in Division Two South to Division One. Steve Kember resigned in July 1993 and returned to Crystal Palace as a coach and after several successful and well-publicised stints as Caretaker Manager. Paul Hinshelwood briefly held the reins following Steve's departure and, following the resignation of his assistant Keith Wilkinson in October 1993, Lee Richardson became assistant manager and 1st team coach.
The Richardson Years
August 1994 saw Richardson appointed manager. This was a very popular appointment, as Lee had been associated with the club on and off since 1975 playing in excess of 400 games for the club. Season 1998/99 proved to be very mixed, with the club achieving good cup results losing to Welling Utd in sight of a first round visit to Bristol Rovers in the FA Cup, and winning through to the last 32 in the FA Trophy going out to the eventual winners Kingstonian in front of a then record home crowd of 945. But a season of chronic injury saw 'Leafe struggle to survive in the league and avoided relegation by winning the last game of the season. 1999/2000 proved the most momentous in the club's history. For the first time ever the club reached the 1st Round proper of the FA Cup when a crowd of 2,164, easily beat the previous season's record in a match which saw them hold league opponents Chester City to a 0-0 draw before going down 1-3 in a replay at Chester. An imposing new stand was built at the top end of the ground just in time for the big match thanks to a superb effort from all involved with the club. The years that followed never lived up to 1999 and the club went into a slow but steady decline in fortunes.
Managerial Changes
In 2002 the team hit a low ebb at Bracknell at Christmas where they suffered a heavy defeat that prompted Richardson's resignation.  Stuart Massey held the reins until October 2006 and after a spell with chairman Mark Coote picking the team, former Crystal Palace striker Dave Swindlehurst joined the club in December. The team did reasonably well under Swindlehurst, he led them to a comfortable mid-table position and the club's first cup final in 20 years. Leafe lost their Surrey Senior Cup final to Merstham at Imber Court and this proved to be Swindlehurst last game in charge. Stuart Massey was re-appointed Whyteleafe manager ahead of the 2008/09 season but only for a relatively short spell.

All Change Again
The winter of 2009/10 was hard one and bad weather hit hard on the club's finances. Massey resigned former AFC Wimbledon and Chipstead manager Nicky English took over in the summer of 2010. Despite the dire financial position the club found itself in English’s team had a purple patch after Christmas 2010, which included a remarkable 5-4 victory at eventual champions Met Police, and steered themselves away from relegation. Nicky's hard work and commitment was never in doubt but things just didn't work in the following year and he left the club in January 2012 with Steve Griffin given the tough job of catching up 20th placed side Burgess Hill Town when 12 point adrift. The appointment coincided with a change in club constitution which saw Mark Coote become owner-chairman (as opposed to elected-chairman). The change gives the Club renewed hope of future development and progression yet the 2011/12 season ended in bitter disappointment and the club’s first relegation in its history despite drawing level with Burgess Hill at one point and only losing to an extraordinary result by the Hillians against Dulwich Hamlet.
What Goes Down...
After a season of moderate success in the Kent League being badly injured in a car accident the summer of 2013 Griffin stood down and former Whyteleafe player and Croydon manager John Fowler joined the club. Fowler build a completely new team in a very short time and one that made an immediate impact. In a memorable season for the club, the team went on to win the newly named Southern Counties East League by a clear 11 points and amongst much celebration the team rejoined the Isthmian League of which they had been members for 28 of the preceding 30 years. The first year back in the Ryman League was also momentous and the team belied expectation  finishing in fifth place only to lose out in a play off match at Folkestone. Leafe truggled to repeat this achievement the following year and in 2016, John Fowler decided he had taken the team as far as he could and stood down.  Former Farnborough assistant manager Leigh Dynan took over in October and began a period of major squad reconstruction. Leigh guided the club to 14th place having picked up 64 points along the way. Leigh Dynan started the 2017/2018 season in strong fashion boasting some impressive pre-season results against teams from the league above with emphatic wins coming against Merstham and Dulwich Hamlet. The league season started strongly also with the club only suffering only two defeats in our first twelve games. Leigh resigned in October 2017 after a 1-1 draw at Church Road against Greenwich Borough. Leigh left and took up the hot seat at Kingstonian Football Club. The management duo of John Scarborough and Paul Dale guided the club for the remainder of the 2017/2018 season finishing in 8th position and narrowly missing out on the Bostik South play-offs. John Scarborough & Paul Dale both stepped down in the summer of 2018 due to other commitments.