The academy set-up offers players a unique opportunity to receive sixth form education and qualifications with Warlingham Sixth Form and to develop their football with Whyteleafe Football Club. All players who are accepted on their football ability will also need to pass an interview for entry to the sixth form at Warlingham Sixth Form.
Players between the ages of 16 and 18 will be trained by highly qualified FA & UEFA coaches and play in the prestigious National League U19 Alliance. The emphasis will be on progressing development squad players in to the Whyteleafe FC first team.

We are currently in the process of strengthening our team for the 2019/2020 season. We are looking for talented footballers aged between 16 and 18 years of age who are currently in Year 11 or 12. As part of our football & Education programme you will train on a full-time basis, whilst completing academic qualifications at Warlingham Sixth Form.
Players must be over 16 and Under 19 on 31st August 2019 to be able to play in the league in the next academic year (2019-2020). They will also attend Warlingham School Sixth Form.

Are you a goalkeeper aged 16 to 18? Interested in attending a trial for the Whyteleafe FC Academy team to play next season (2019-20) then contact Academy Director Ken Fisher to arrange a suitable day and time. 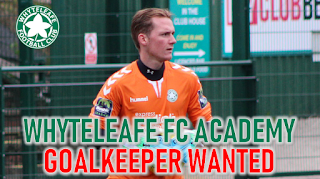