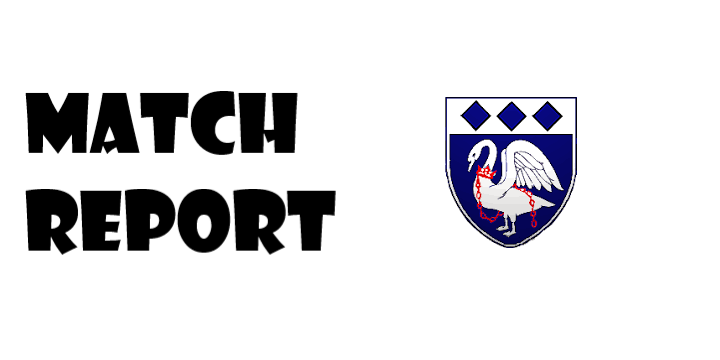 A surreal few days for Whyteleafe FC and a surreal start to the evening for me. I usually do the Football Web Pages duties for our home matches and as a result I like to get to the ground an hour or so before kick-off so I don’t have to rush to get the team line-ups entered. I was making good time on my journey when on the outskirts of Edenbridge I came upon a big traffic jam. The reason was a massive – and I mean MASSIVE – bull that had parked himself across the road and refused to budge! On a par with ‘dog ate my homework’ but actually 100 per cent true!

With a congested fixture list and teams playing catch up already, there’s no room on the calendar in this season’s FA Cup matches for extra time or replays. With the torrential rain playing its unwelcome part this weekend causing Leafe’s Saturday visit to Buckinghamshire and the home of Burnham FC of the Hellenic Premier League to be postponed less than an hour before kick-off, it had chucked a hefty spanner into the works.

Burnham’s supporters and staff made a valiant effort to clear their pitch of water from 8am on Saturday morning, all to no avail. Half of their pitch looked like a rice field, so it was no surprise that the referee canned the game.

Thanks though to the congestion there was an FA requirement for the game to be played on Monday evening. With buckets more rain on Sunday and despite more Herculean efforts by Burnham, they were forced to concede defeat and switch the game to Church Road and our 3G pitch. As a result, they were technically the home side for the match.

Evening cup games are always a bit special at Church Road under the lights. A good Monday evening crowd turned out to watch Harry Hudson’s men play their fourth FA Cup match of the season. It beginning to dawn on Leafe fans and casuals alike that Harry’s team has had a great start … no sorry, I’m not tempting fate! Enough.

As the draw for the third qualifying round had been made, earlier in the day, both sides knew that a plum home tie against National League South team, Concord Rangers awaited the winners. A huge incentive.

Harry named an un-changed side fresh from the home victory over Chichester City the week before and came into the game unbeaten in six competitive matches thus far this season. Meanwhile, our opponents sit bottom of the Hellenic League Premier Division, albeit having played three games less than their rivals due to their FA Cup exploits.

Ironically, Binfield FC, whom we beat in the previous round sit comfortably atop that league after five games of the new campaign. For the record, the Hellenic Premier is the same level as the SCEFL (Southern Counties East) and Southern Combination.

From the kick-off there was to be no doubting that Burnham were up for the cup and they pressed and harried and gave Leafe no time to settle. Clearly, Burnham had done a bit of homework and applied themselves to their task. A seemingly innocuous free-kick in the third minute out on Leafe’s left was lofted high towards the far post and one of the three Burnham centre-backs, Brad Holland, was given a free header to open the scoring.

Not the start that Leafe were hoping for. Much like the previous cup game against Binfield, it took Hudson’s men a while to work out their un-familiar opponents and plot a way through their packed midfield. Like had happened against Binfield, a way through was found and from about the twenty minute mark Leafe began to get on top.

A quiet start for the mercurial talent that is Ryan Gondoh soon saw him come alive being fed the ammunition he thrives on by captain Helge Orome and Mannie Mensah looking very close to his best after that toe injury that caused him to miss most of pre-season and the first few games of the season proper.

It wasn’t long before Gondoh, aided by new signing strike-partner, Aaron Watson began causing Burnham’s defence serious issues who despite sterling efforts began to look a bit ragged once Gondoh and his mates started to get at them. Burnham goalkeeper, Carl Dennison making the first of several top drawer saves to keep his side in the tie and the score down. He was easily Burnham’s standout player on the night.

A scrabble in the penalty area saw the ball break to Helge Orome who managed to scramble the ball over the line for Leafe’s equaliser in the 27th minute. Once that went in it seemed to settle everyone – fans and all – down.

Burnham plugged away and had several half chances but Leafe were on top and made it 2-1 on the stroke of half time when Aaron Watson was put through on goal, with Burnham’s defence caught out playing what looked like a suicidal high line and beaten for pace by Watson, who remained calm and dinked the ball over the on rushing Dennison’s head. Actually, Watson had a very live wire shout for a penalty turned down a few minutes before having been seemingly tripped inside the area.

Second half really saw Leafe controlling the game, although again credit to Burnham who continued plugging away looking for a way back in, without ever really creating any clear-cut chances on Tyler McCarthy’s goal.

Aside from the early lapse the Whyteleafe defence once again looked solid, with full backs Dami Olorunnisome and Jeremie Milambo putting in good displays, particularly young Dami who really does pose an attacking threat to opponents, who often aren’t prepared for a rampaging right back like him. Meanwhile, centre-backs Jamie McGeoghegan and Antone Douglas have built up a good understanding.

With Gondoh and Watson in such imperious form, it’s easy to overlook the work that the Leafe midfield is doing this season, with Bentley Graham and Ricardo Thompson sitting deep allowing Helge Orome and the dynamo that is Mannie Mensah to create the attacks. Helge seems to be thriving in his captain’s role this season, popular with his team-mates and fans alike also putting in huge shifts and loving his new midfield position.

But for Burnham keeper Dennison the game would have been out of sight much earlier, but it was finally settled in the 90th minute when Ricardo Thompson netted Leafe’s third.

A proper cup tie played in a competitive if occasionally niggly spirit and the tally of eight bookings is perhaps surprising although the red card for Burnham defender, Brad Holland in the closing stages for a second bookable offence, wasn’t. So, Burnham can now concentrate on Hellenic League Premier business and we wish them well for the rest of their season.

Whyteleafe now move into the Third Qualifying round and welcome National League South side Concord Rangers to Church Road next Tuesday (October 13 – 7.45pm) for what promises to be another memorable night under the lights. It could be argued that now is as good a time as any to take on a National League South side as they have just started their competitive campaigns this season, but the fact remains that they are two divisions higher up the football pyramid than us, so it will be a tough ask for Hudson’s talented young group.

A hard shout for Leafe man of the match as there were several contenders. I think for leadership and on performance, maybe Helge would take the award. Just. Overall though, it was a superb team effort.

One thing is for sure though, Harry enjoys the FA Cup and after taking us to the fourth qualifying round last season, us fans enjoy the rides he takes us on. He also loves pitting his wits against managers from bigger teams. It’s hard to forget the atmosphere at Church Road when Chippenham Town (also of the National League South) came to visit last season so here’s hoping for another great occasion even though on the day, Chippenham deserved their victory.

However, Church Road under the lights. It really is special isn’t it? Plus, it’s the FA Cup and we all know that anything can happen.

Before that however, we have a league game on Saturday (Church Road - 3pm) when we entertain many people’s favourites for the league this season, Cray Valley PM. It should be a real test for Leafe with the paper millers from the valley of Cray also having a storming start to the season. See you there.