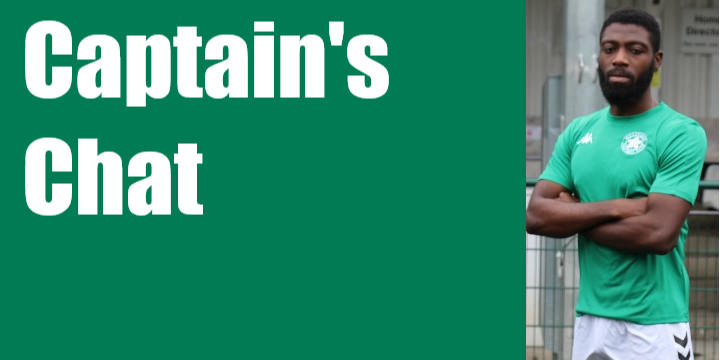 After a busy few weeks for the Leafe first team and a dramatic FA Cup third qualifying defeat to National League South side, Concord Rangers at Church Road on Tuesday, Leafe Gaffer, Harry Hudson is taking a breather this week. So, Steve Hole thought he'd catch up with skipper, Helge Orome, instead. Lots to catch up on so let's get on with it...

Helge, how are you finding the captaincy role, this season?

I've enjoyed every second of it! Doing a lot better than the first time round when I lost four out of four! I was beginning to think I was cursed!) I think the added responsibility has added to my performances and I hope to continue to lead by example on and off the pitch.

I think you've captained sides in the past though, right?

I also captain the England six-a-side team, which again is an honour to represent your country at any level but to lead the boys out at a World Cup is something I will always be proud of.

Now, when I was doing the new player profiles (WATCH OUT FOR THEM – COMING SOON) the other day, I noticed something interesting on yours. Can you tell me more about gaining Ivory Coast U21 caps while playing non-league? That's quite an achievement.

Yeah, thanks but I could say I was very fortunate, with circumstances and timing but you have to create your own luck. I had a good debut season at 18 in step 3 playing over 40 games. During that time, I was also back and forth at Stoke City, so they were monitoring my progress as I was eligible to represent Ivory Coast through my father.

The same year Ivory Coast had to play a 2012 Olympic Qualifier and were also the reigning champions of the prestigious Toulon Festival. They had to attend both so a larger pool of players were called up and I was fortunate enough to be one of the players selected.

This year's Leafe squad seems to be mega-talented? With plenty of teenagers in the side, your role is a bit more than just a captain's one though, right? You have to be a mentor and dish out the odd verbal, when required, here and there?

Yeah, it's certainly not an easy role. Just have to find the right balance of being involved and being more receptive of everything that goes on. I feel I can relate with everyone as I have been through similar experiences at one stage in my life or career while trying to be the character that I wish I had when I was breaking through as a young boy.

Let's talk about the start to the season. Great to go unbeaten in six games?

It's been a great start. We knew we would be up against it, when the fixtures came up, but we just got to take each game as they come and worry about our performance. The results will come.

There now seems to be a bit more steel in the side to go with the skill and creativity. A really determined spirit?

Yes definitely. One thing we've lacked in the past is that bit of steel and tenacity to add to the bundles of skill and ability. We've recruited well this year with obviously talented players but with a winning mentality and also a determination to perform consistently well every game.

The dressing room seems to be a really happy environment this season?

It was a really weird pre-season, which I'm sure was the case for many people, but it helped having the core players going into our third season together. With characters like a Ryan Gondoh (never a dull moment with him) or a Manny Mensah (who says a phrase every two weeks) in your changing room, spurred on by the great start to the season, you can understand why the vibes are good right now. Long may it last!

We have to talk about this season's run in the FA Cup. Leafe fans are getting used to Harry taking us on a lovely cup journey nowadays! We sadly reached the end of the line for this term on Tuesday evening, however, when National League South side Concord Rangers visited Church Road. What a great performance and effort by you and the boys even though we lost, we went down fighting.

H is an unbelievably talented manager and he enjoys the big games as much as we do. We're still gutted with that result. We thought we matched them and caused them problems throughout the game and at times outplayed them for spells. We have a group of winners and I know the players felt we could have gone at least another couple of steps further, but we must always look at the positives with the FA Cup run putting us in good form and a great position to start the league campaign the way we have done.

The two-division gap wasn't exactly obvious, if I may say. At times Concord were rocking and I think could consider themselves to be fortunate to have sneaked a 2-1. How did you see the game, Helge?

It most certainly wasn't obvious. But that doesn't surprise me. We've got players who can easily play at that level now! The disappointing thing is the fact that they didn't really open us up and we gifted them their two goals. So, yes, they we're fortunate but take nothing away from them, they still had enough quality in positions that applied pressure and forced mistakes, which they punished. Good luck to them in the next round!

Thanks again for this season's FA Cup adventure, from all Leafe fans. Talking of which the atmosphere at Church Road was superb on Tuesday evening wasn't it with a great - socially distanced, of course - crowd of 400? We were really trying to be the 12th man, almost blowing the ball into the back of their net, particularly when we were piling the pressure on them, looking for an equaliser in the dying minutes of the game!

That was the best atmosphere I have ever experienced at Church Road. Definitely topped the win against Corinthian Casuals a couple seasons ago in the Cup. It was absolutely electric and we appreciate the support and hopefully we can give the Leafe fans many more things to shout about!

We owe a lot to the fans. I don't think I have enough words to describe how important they are to what we do here at Whyteleafe FC. Their support is unbelievable at times. It's not just about travelling up and down the country and attending games every week. It's when they raise their hard-earned money with the 12th Man Fund and their attendance to fundraising activities to support H and the team. It's something that doesn't go unnoticed and we'll go into every game with the intention of paying back the fans for the love and support they have shown. UP THE LEAFE!

Onwards and upwards - before we get back to Pitching In Isthmian South East business we face Cray Valley PM again this Saturday - this time in the FA Trophy (Church Road - 3pm). I think they are a side you rate highly? We had a great tussle with them in the league game (2-2) last Saturday?

Cray Valley for me are one of the top sides in the division and are clear favourites to go up. They have a very talented squad and the closer you stay to them the higher the probability that you will do well. The result last week will be disappointing for both sides for different reasons, as they definitely did enough to win the game but conceding in the 93rd minute and getting a point shows the new found resilience we now possess as the old Whyteleafe would have gone on to lose that game.

Finally, looking slightly further forward, to next Tuesday (October 20) we travel down the M20 to face Ashford. They will always be a dangerous opponent even though they've not had the best of starts to their league campaign?

Every opponent in this division will be dangerous and we cannot take anyone's form or league position lightly. With that being said, the penny can drop at any time, so we will have to be prepared to earn every single point we gain this season and keep the train rolling. One game at a time!