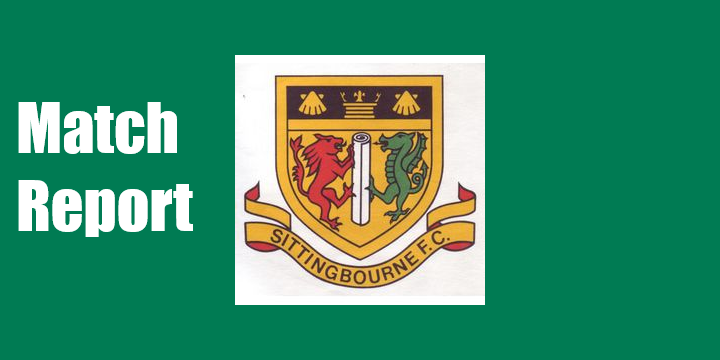 Whyteleafe's good start to the season continued as victory at Sittingbourne saw them climb to 4th place in the table.

Playing conditions were difficult with strong gusts and squally rain on and off throughout the match. Leafe were back on league duty after two tough cup matches last week against Concord Rangers and Cray Valley Paper Mills. Leafe were caught cold at the start of the game and found themselves a goal down after 40 seconds. Kane Rowland put a well placed cross into the box and Johan Caney-Bryan got between the Leafe defenders and his well placed shot beat Tyler McCarthy and into the back of the net. This was to be Caney-Bryan's only contribution as he picked up an injury early on and had to be substituted.

Leafe's first effort came from debutant Ojemen Briggs his shot following a 25th minute corner from Ryan Gondoh was deflected over the bar. A minute later Gondoh went close twice, his curling shot was headed off the line and following up, he shot into the side netting.

Leafe were not playing at their usual level and chances were few and far between. Gondoh had one more shot following a good run but it was too high, then Emmanuel Mensah spotted Jordan Perrin off his line but Corey Walters -Wright was quick to spot the danger and headed the ball off the line.

Leafe found themselves a goal down at the interval and needed to up their game if they were to get something from the game. Leafe looked much stronger after their half time talk and some tactical changes from manager Harry Hudson.

A much more positive looking Leafe got an equaliser in the 53rd minute. A strong run and cross from Dami Olorunnisomo found leading scorer Omari Hibbert in the box and he made no mistake from close range.

Gondoh was causing the visitors defence problems and in the 57th minute was brought down in the box to earn a penalty which he took himself and scored with a well struck shot.

Leafe were certainly in the middle of a purple patch and 11 minutes later extended their lead, this time Gondoh was the provider and Hibbert bagged his 8th goal of the season, again converting from close range.

Jamie McGeoghegan was immense in the centre of defence and was well supported by Antone Douglas, Olorunnisomo and debutant Briggs. The Brickies were unable to create much and Leafe looked comfortable with their lead although a somewhat fortunate goal from Rowland in the 75th minute gave the hosts hope, his shot taking a deflection off both McCarthy and Olorunnisomo before going into the back of the net.

Sittingbourne did have one great opportunity to equalise when the impressive George Monger put a great cross into the box, finding Rowland, but he missed the target from close range.

Gondoh almost extended the lead in stoppage time, Perrin making a smart save to tip the ball round the post.

A fine victory for Leafe and after a quiet first half a very strong performance in the second half. Leafe now welcome Burgess Hill to Church Road on Tuesday before tackling Level 3 side Chesham in the FA Trophy on Saturday.