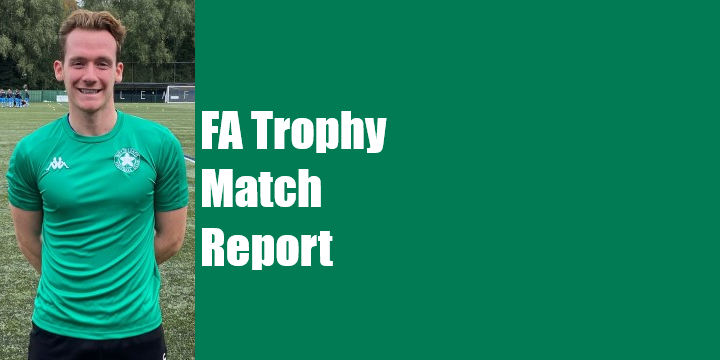 So, Church Road on Saturday and another cup match and another fixture against Cray Valley PM. Seven days earlier the two had faced off in a league match where honour and points were shared after a 2-2 draw.

Since Cray came into our league two seasons ago there’s been a bit of south London rivalry develop between the two clubs.

Last week, a brace for Omari Hibbert saw us leading until Cray clawed their way back into the match grabbing a 93rd minute equaliser and a share of the points. Speaking to fans and some of the Leafe players after the match they were very complimentary about the quality of the visitors that day.

For Saturday’s FA Trophy match both managers rotated their squads, with Leafe boss Harry Hudson seizing the chance to give some of his squad players an outing. Indeed, just four of the starting eleven against Concord Rangers on Tuesday lined up against Cray Valley.

Harry gave first team starting debuts to Simeon Dennis, Ryan Atkinson, Hamid Kanu and Javen-Scott Palmer, while Tino Carpene got a run out upfront as did Antonio Walker-Barth in midfield.

Our visitors from the valley of Cray started at a canter and a second minute free kick out on the Leafe right was hit fiercely by Samuel Hasler thudding against the crossbar and out of play with Tyler McCarthy beaten.

Good Leafe build up play in the 12th minute, with Walker-Barth pulling the strings led to Helge Orome going close with a shot on the edge of the 18-yard box.

It took the home side a while to settle against a steady Cray Valley game plan of all-out attack but a Leafe back four - with three new faces in it - held firm, with young centre half Hamid Kanu getting a real test against Cray’s powerful number 9, Francis Babalola, who was at the thick of much of the visitors best periods of play.

I think all Leafe fans have been very impressed with keeper Tyler McCarthy’s performances this season. He carried on his superb form on Saturday making four excellent saves in the first half, two of which should really be coined with the ‘worldy’ cliché. Totally outstanding. Little did we know at the time though that Tyler was saving his best until last!

All square and goal-less at half time - and leaving aside the Cray chances - Hudson’s young side had acquitted themselves well particularly when you consider that Leafe were without the likes of Ryan Gondoh, Aaron Watson, Bentley Graham and Mannie Mensah. The two debut making full backs, Dennis and Atkinson really caught the eye. Javen Scott-Palmer gave a great account of himself in attack with some powerful runs and non-stop effort in the first half teaming up well with strike partner, Valentino Carpene.

As far as the second half was concerned it really wasn’t much to write home about. A superb precision free-kick by Simeon Dennis from about 18-yards out evaded Cray keeper and skipper, Andrew Walker and kissed his right-hand post as it bounced out of play, being the highlight.

It remained goal-less at the final whistle and this season with replays and extra time non-starters that meant one thing – a penalty shoot-out. Time for Tyler McCarthy to further cement the man of the match award he’d already claimed!

Cray won the toss and went first. The atmosphere building and McCarthy diving sharply to his left to make a great save to keep out Cray’s first spot-kick.

Leafe skipper Helge Orome stepped up and stuck his kick in the best possible place. The bottom right hand corner. Walker went the right way but was never going to stop it.

If we thought the first Tyler stop was great, then the second was even better. Substitute Dan Hogan went next for Leafe. To say his penalty was amazing is an understatement. Dan placed the ball on the spot, retreated a couple of paces, casually walked forward - while giving Walker the eyes - and literally tapped the ball into the net with the keeper going the wrong way! Harry Hudson described it as ‘a milestone moment’ after the game.

Regardless, Leafe were 2-0 up. You wouldn’t expect anything less than a bit of drama though, would you? Cray netted their next two while Leafe missed theirs, Walker making a brilliant save for one of them, it must be said.

Their fourth penalty was blasted wide of the post but they scored their fifth meaning that ‘all’ Javen-Scott Palmer had to do was score to give Leafe the victory. With the crowd holding their breath he calmly dispatched the ball into the back of the net. Cue more memorable scenes of celebration at Church Road and Leafe into the next round of the Trophy.

Cray, meanwhile, were gallant losers and are a quality side indeed. They are sure to be up at the sharp end of the league come season’s end …