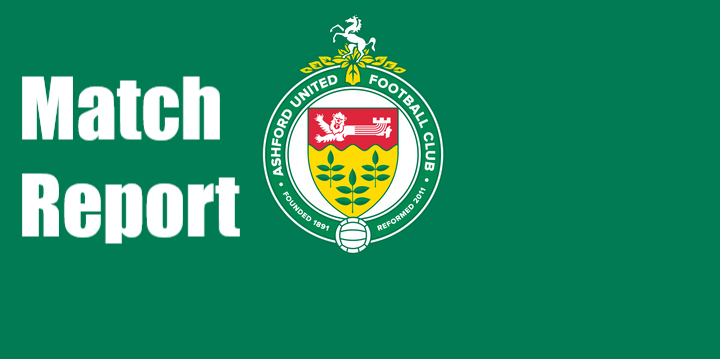 A first league defeat of this season for Leafe away at Ashford United. Not a happy hunting ground in recent seasons.

Whyteleafe came into the game fresh from a victory in the Buildbase FA Trophy against Cray Valley PM and in overall good form. Football has a way of bringing huge highs and desperate lows, often unexpectedly. I guess that’s one of the reasons we all love the game so much. You never quite know what’s around the corner.

The travelling Leafe faithful – you know who you are! -  probably expected a slightly better performance against an Ashford United who haven’t made the best of starts this season. Harry Hudson named a full-strength side with the notable exception of striker Ryan Gondoh who had a slight niggle and wasn’t risked.

Ashford, with former Leafe full-back Bradley Simms prominent early on, took the game to Whyteleafe from the kick-off and grabbed the lead after a good move down the Leafe left after just seven minutes. A low cross into the middle was met with a smart first time shot from the dangerous Jack Steventon.

Frankly, it was a lead they never looked like losing. It was no real surprise when a break down the left in the 25th minute saw Ashford’s striker, Johan Ter Horst, beat Dami Olorunnisome and then cut inside Jamie McGeoghegan before firing a low shot (albeit deflected) past Leafe keeper Tyler McCarthy.

After a half-time roasting from Hudson, Leafe looked a little more combative in the second half with forward Aaron Watson having two efforts that on another day may well have gone in. There was only one shot on target though all game. Ashford keeper Sam Mott had a pretty easy game.

Ashford could have made it 3-0, when Thomas Fagg drew a smart save from McCarthy, late in the second half, but all-in-all a disappointing result but everyone has a bad day at the office from time-to-time and performances hitherto have been very good.

The result leaves Leafe in eighth place in the Pitching In Isthmian South East table (level on points with Ashford in ninth) although we have a game or two in hand on all of the teams above us except East Grinstead.

Whyteleafe now have another trip into deepest Kent this Saturday (October 24 – 3pm) to take on Sittingbourne.

One final point. Something I have noticed about midweek away trips. Why is it – normally when we’ve lost – that insult is often added to injury, when a major road is closed barring the way homewards? Last night the M20 was shut for roadworks meaning another magical mystery tour and a bit of lateral thinking for the journey back to Surrey!