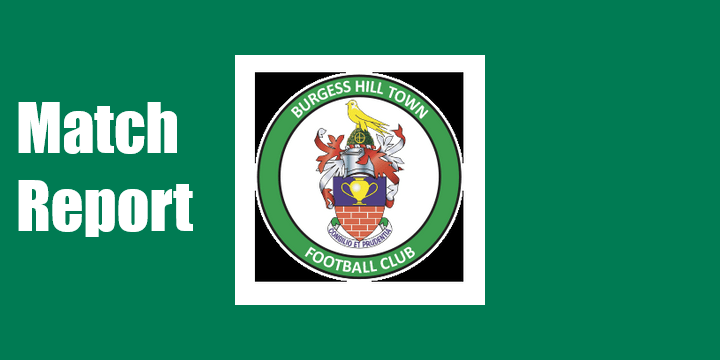 Whyteleafe turned in another great performance in front of a bumper crowd of 310 to climb to third place with this emphatic win against struggling Burgess Hill. A great atmosphere with good vocal support for both sides, credit going to the visiting fans for backing their side throughout despite a disappointing performance.

Leafe got off to a great start when Ryan Gondoh won the ball on the edge of the box, found Aaron Watson in the box and he fired the ball past Alfie Jones into the net on just four minutes.

The hosts looked deadly in front of goal and it was no surprise in the 15th minute when their lead was extended. Riccardo Thompson played a great ball through to Gondoh who put the ball into the box, leaving leading scorer Omari Hibbert the simple task of a tap in from close range.

Gondoh got his third assist of the game in the 25th minute, another great ball sent Watson clear and once more he found the back of the net.

Burgess Hill enjoyed a fair amount of possession after that but Leafe defended well. They had to wait until the 36th minute before their first good chance, Andrew Herring shooting over following a pass from Alex Laing.

Gondoh had two late chances in the half, one shot was deflected for a corner and a 30yard free kick was struck straight at Jones.

Martyn Box had a chance in the 49th minute when the Hillians won a free kick on the right-hand edge of the box. His effort was just wide of the target. A minute later Gondoh hit the post after a great through ball from Emmanuel Mensah.

Mensah then provided another great defence splitting pass and Watson latched onto it and slid the ball past Jones to complete his hat trick in the 64th minute.

Herring missed another good chance, slicing wide when in a good position, and shortly afterwards, to complete his miserable evening he was shown a straight red card for a dangerous tackle on Gondoh. Burgess Hill also picked up four yellow cards as they became frustrated and lost their discipline.

Watson completed the rout in the 85th minute with a superb goal to score his 4th and his teams 5th of the night. With defenders in front of him, he chipped the ball over them, was first to the ball and fired home past Jones.