Filter by: Club news | Leafe in the Media | Match reports |

News: WFC withdrawn from league
It is with deep regret and sadness that we informed the Isthmian League earlier today that Whyteleafe FC will not be playing in next season’s Isthmian South Central League... >> Read more 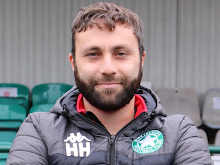 News: Harry Hudson resigns
Whyteleafe FC can confirm that 1st Team Manager Harry Hudson has resigned.Harry, who has been with the club for three seasons, said in a statement that he felt that he had taken the club as far as he can... >> Read more

News: Farewell to Leafe Legend Tony Lidbury
There can’t be anyone in the Whyteleafe FC ‘family’ who wasn’t greatly saddened to hear of the passing of the club’s Life Vice President Tony Lidbury... >> Read more

News: Gaffers Chat 27/11/2020
Steve Hole sits down for a Zoom call with Leafe gaffer Harry Hudson for a catch up and a little look back at the first half of the season pre-lockdown2... >> Read more

News: Captain’s Lockdown Chat
Steve Hole has been keeping the office Zoom app busy this week and managed to catch a quick uplifting chat with Leafe skipper, Helge Orome ...Helge, how has Lockdown 2 been for you so far?It's been absolutely boring! The less I speak about it, the better!Not... >> Read more
News: Liverpool Legend New WFC Landlord
Following a long period of uncertainty the club has been informed that the Church Road ground has been bought by Irama and Liverpool FC legend Ian Rush – now the club’s new landlords... >> Read more

News: WFC to shut 5th Nov but we’ll be back 2nd Dec
In order to comply with the Government’s Covid-19 lockdown restrictions Whyteleafe Football Club’s Church Road ground will be closed from Thursday November 5th for all football... >> Read more

News: Gaffers Chat 03/11/2020
Another bizarre week in a very strange year although an exciting one for Leafe fans, with two league matches and an FA Trophy game to talk about.Must also mention our new SPONSOR A PLAYER which will be launched on the club’s website VERY SOON... >> Read more

News: Match Report Burgess Hill Town
Whyteleafe 5   Burgess Hill Town  0Report by Brian Davis         Whyteleafe turned in another great performance in front of a bumper crowd of 310 to climb to third place with this emphatic win against struggling... >> Read more

News: Gaffer’s Chat – 23/10/2020
After another busy week for Whyteleafe FC involving a heart stopping penalty shoot-out in the FA Trophy last Saturday and a not so euphoric midweek excursion to deepest Kent, it’s time to catch up with Leafe boss, Harry Hudson for his thoughts and views... >> Read more

News: Gaffer's Chat 08/10/2020
As Leafe fans we never take things for granted as we all know how quickly things can change in football (not to mention life, in general!) but time, I think, to take a gentle look back at the first seven competitive league and cup games with Leafe... >> Read more

News: FA Cup Reversed to Monday night at WFC
Following Saturday’s postponement of our FA Cup 2nd Round Qualifying match v Burnham FC the match has been reversed and will take place at Church Road on Monday (October 5th)Kick-off will be at 7... >> Read more