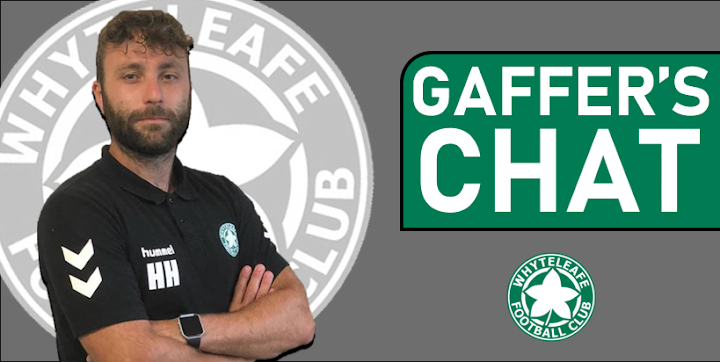 Welcome to Gaffer’s Chat and a quick chance to talk about all things Leafe ahead of this week’s Pitching In Isthmian South East League opener away to Herne Bay, closely followed by our Emirates FA Cup First Qualifying Round clash with Binfield FC. Without further ado let’s catch up with Leafe boss, Harry Hudson.

Looking back to last Saturday and the comfortable home victory against Bearsted FC in the Preliminary Round of the Emirates FA Cup. The manner of the performance must have pleased you as much as the scoreline, surely? If the word ‘comfortable’ can be applied to a win that was it with all due respect to Bearsted.

Yes, the boys approached the game in the right manner and put the match to bed in the first half, which was pleasing. Bearsted caused us some issues at times but generally we were in control.

Knowing how you and Calum work you would have had expectations and targets so where are you in terms of performance levels and where you wanted to be going into the season proper?

I think we had a disjointed pre-season but since the Glebe game things have started to come together and we are pleased where we are at going into Herne Bay on Saturday.

Can you tell me more about our new centre forward, Omari Hibbert, who bagged a brace of goals on his debut plus an assist. He looks a proper handful. A big, traditional type of target man who holds the ball up well? Where did you sign him from?

We have chased Omari for a number of years but we never quite managed to get him over the line until this season! Not only is Omari a very talented player who adds a different dimension to our game he is also a fantastic leader and personality in our group which is very much needed. We look forward to a successful season with him.

Harry, at long last our league campaign kicks off this Saturday with an away trip to Herne Bay. The Kent club are one of the bigger spenders this season, so how do you view the game? I think we played them on the opening game of last season, too. Obviously, you will be looking to get the league season off to a good start?

Yes, we are very much looking forward to the game. Herne Bay are one of the favourites for promotion this season and they have assembled an excellent squad so it will be a great test for our group. The expectation is on Herne Bay at home to win the game but we will be looking for an upset.

From what us Leafe fans can see, with Ricardo Thompson, Andrew Sesay and Mannie Mensah soon returning from injury you might have a nice problem for a change! Picking a starting eleven from looks like another promising young squad and one that has a nice bit of depth, not to mention scary talent.

Mannie and Ric have returned to training this week but I think it will be too soon for them on Saturday. Sesay is still a couple weeks away but we can’t wait to have him back. The only issue with having a young and talented squad is the amount of trials we are trying to manage as four or five of our players are being looked at by league clubs.

A quick word for this season’s captain, Helge Orome. In pre-season he seems to have developed, not only as a player in his new midfield role but fits the captaincy role superbly? Everyone could see how delighted he was with his goal on Saturday, too.

Helge has been awesome for us for the past two seasons but this year he has really come into his own. Skipper Helge! Brilliant!

Almost before you have time to catch your breath, we have the return of what must be your favourite competition on Tuesday (September 22) – the Emirates FA Cup and the First Qualifying Round – when we welcome Binfield FC to Church Road (7.45pm BE THERE!)? What do you know about them, Harry?

We are doing our research now on them but they are highly fancied to get promotion from step 5 (Hellenic League Premier Division) this season so they will be a stern test for us! They battered AFC Totton in the last round 5-1, which was a real cup upset.