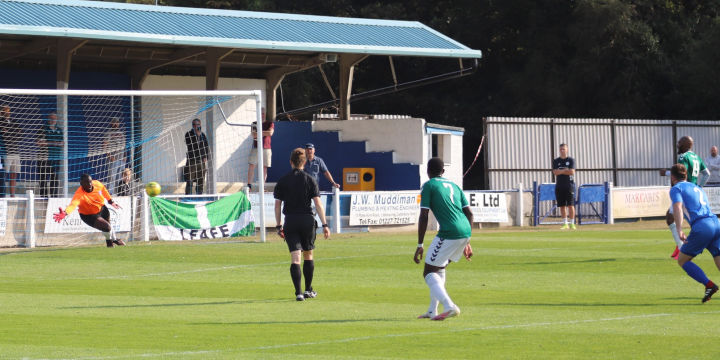 Whyteleafe got off to the best possible start to the season with a comprehensive win at Winches Field, a happy hunting ground for Leafe since the Kent League days, and their first visit since a 1-0 win in August 2018 as last season's fixture was lost to lockdown.
Leafe's first half performance was awesome, constantly threatening the hosts goal and some clinical finishing. Herne Bay had little answer to the fine attacking football and to try and mitigate the damage made early changes, one after 22 minutes and two more at half time.
In a first half dominated by Leafe it was in fact the hosts who created the best early chance, Zac Ansah found himself in space in the box, but Tyler McCarthy, probably the best keeper in the league, was quickly out to smother his shot from close range.
Leafe then were awarded two early penalties by referee Kirsty Dowie. Herne Bay could not cope with the pace of the Leafe forwards who were making attacking runs into the box. In the 9th minute Ryan Gondoh was upended by Mobalaji Dawadu after a strong run down the right. He took the spot kick himself firing into the top left-hand corner. George Kamurasi went the right way but had no chance of reaching the powerful shot.
Twenty minutes and a repeat of the first, except this time it was young star Courtney Clarke who's powerful run into the box came to an end when he was brought down by Ryan Cooper.  Same decision, penalty, same result, Gondoh firing the ball into the net.
Herne Bay had a reasonable share of the ball but rarely got through a well organised Leafe defence. Jamie McGeoghan was a rock in the middle and Dami Olorunnisomne had a superb game, both defending and also his distribution was outstanding. setting up several of the Leafe attacks with telling through balls. He had a shot himself saved by Kamurasi after Gondoh had another great run and laid the ball off to him.
Gondoh was in the thick of the action and got an assist in the 36th minute finding striker Omari Hibbert on the edge of the box, and he fired an unstoppable shot low into the bottom corner of the net.
Manager Harry Hudson seems to unearth a goal scoring talent every season and Hibbert looks as though he will continue this trend. In the 42nd minute he scored his second goal, and his 4th in 2 games, when Helge Orome found him in the box following more good play from Gondoh.
The second half was much more even, Leafe content to preserve their lead and Herne Bay strengthened by their substitutions, but unable to make much headway. When they did create chances, they found McCarthy in fine form, one save in particular from Keiron Campbell, tipping round his 55th minute shot the was curling in towards the top corner of the goal.
Leafe's one lapse came in the 69th minute when Dawadu was left unmarked and he headed home from close range from a corner but this turned out to be nothing more than a consolation. Herne Bay never really threatened to add to their score, in fact it was Leafe who came nearest in the closing stages, with Olorunnisomne and Hibbert both seeing efforts on target saved by Kamurasi.
Leafe; McCarthy, Olorunnisomne, Milambo (Dennis 58), Graham, McGeoghegan, Douglas,  Clarke, Orome, Hibbert, Mensah (Archer 79), Gondoh (Carpene 81).  Subs not used, Hamd, Thompson. 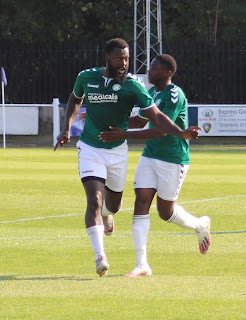