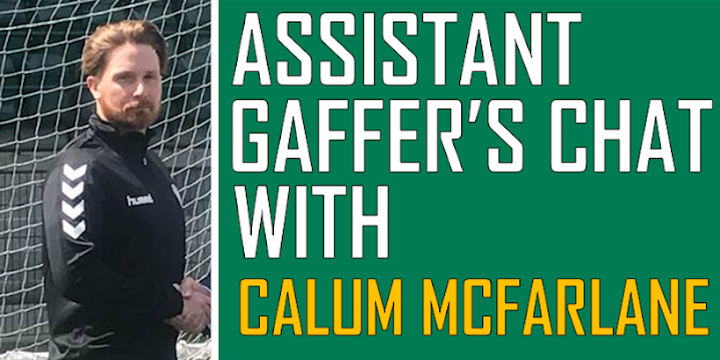 Welcome to Gaffer’s Chat - a quick – and overdue - catch-up on all things Leafe.

With light definitely at the end of the very long and horrid tunnel I think I speak for all Leafe fans when I say how delighted we are that Harry Hudson and his assistant, Calum McFarlane have agreed to stay at Leafe for the 2020/2021 season … Under Harry and Cal, the football has at times been sublime and never short of entertaining, plus they've taken us on an amazing FA Cup journey and well, it’s GREAT news.

Also, a quick and massive pat on the back to Leafe chairman Mark Coote and general manager, Clive Davis plus of course all the volunteers who have worked tirelessly to give our beloved Church Road - the home of football, of course! - a huge spruce up in advance of the new season  If you haven’t been to the ground since the truncated and unfortunate end of last season, you will be impressed. The place looks GREAT.

With Harry taking a well-deserved holiday, it's over to Calum this time.

Cal, as I said above, Leafe fans will be absolutely delighted to hear that you and Harry will be continuing at Leafe for the forthcoming season. What are your thoughts?

Really excited to be back and delighted we will remain at the club for another year, especially with the abrupt ending of last season. The staff and players definitely feel as if we have some unfinished business - it’s felt like a really long time away from the game. It is great to have the lads back in training and start the preparation for the upcoming season.

Can you give us some more thrills and spills, please? We’ve all really enjoyed the ride so far!

It’s good to hear that you’ve enjoyed the ride so far! It’s been a really positive two years for us at the club and we will try our best to continue to entertain the fans by playing exciting, attacking football. We just want to try to build and progress each year.

I know it’s early doors yet but can you give us an idea on how the squad is shaping up for the new season, please?

We are really pleased with our squad - we’ve pretty much kept most of the team we finished with at the end of last season. With a pre-season behind us, hopefully we can get the team firing.

Unfortunately, we have lost a few players, Nathan Campbell retiring will be a big loss to the team. Cam has been brilliant for us over the last three seasons and has been integral to any success we have had.

Matt O’Donoghue has moved on to play at a higher level, and we couldn’t be more proud. We wish him the best of luck in the league above (I think we all agree with that – SH)

Great to hear that you finally have some friendlies arranged - albeit behind closed doors, for now – but you must be delighted to get the boys back playing competitive football matches again?

Yes, we have all missed every aspect of football, especially the match days. Everyone is buzzing to get back on the pitch! Hopefully it won’t be too long until we can play in front of the Leafe fans again.

There are some interesting fixtures lined-up. We kick off the mini-season with a home game at Church Road against Gillingham side, Holland & Blair? What do you know about them?

They play in the SCEFL league, which is one level below us, and I believe the top four from that league get promoted this season.

A lot of teams at that level are investing heavily knowing it’s the best chance they will have to gain promotion. All clubs in the SCEFL will present a challenge for anyone. Cray PM have proven that.

It being so early in pre-season we don’t have any detailed information on personnel or playing style, but I expect them to be a very physical and experienced side. They will ask questions of our young squad and I’m excited to see how we cope with that type of opposition.

I note that the FA Cup draw for the qualifying rounds takes place on August 18. Are you hoping for another cup adventure? I think there's a possibility that we'll be in competitive action before the BetVictor Isthmian South East campaign kicks off. Does that affect your planning?

It doesn’t affect our planning particularly - by the time September comes around we will have had a sufficient amount of pre-season friendlies and time on the training pitch to make sure the boys are physically and tactically ready for the restart.

In regards to FA cup adventure, we are all in on that. Last year was fantastic and something we will all remember for a long time, maybe this year we can do even better!

Finally, and very importantly. I believe you could do with the marvellous and hugely supportive Leafe fans getting behind Greg’s ’Twelfth Man Fund’?

The fans have always done everything in their power to support the management and playing staff. Obviously COVID-19 has massively affected all non-league clubs, and our club is no different, so any fans that would like to contribute to the “twelfth man fund”  that would be hugely appreciated by all at the club.