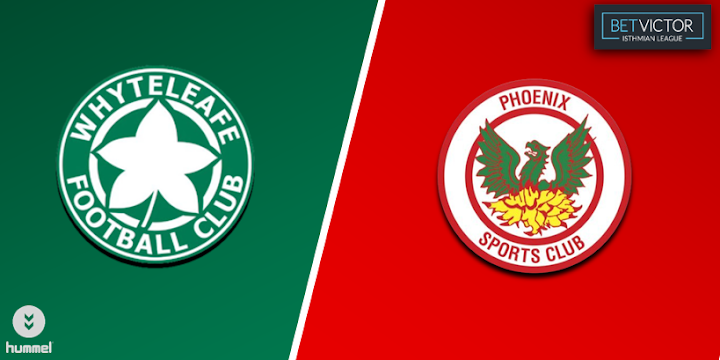 Whyteleafe climbed to 10th place and are now just one win away from the play off places with 3 games in hand. An entertaining game with both sides creating plenty of chances. Phoenix, the leagues leading scorers, showed their intentions as early as 30 seconds into the game when Ben Allen tried a shot from 25 yards that Tyler McCarthy comfortably saved. At the other end, Antonio Walker-Barth, on a welcome return to the team had a chance in the 6th minute that was saved by Stephen Phillips
Leafe went close after 11 minutes. A superb free kick from Peter Wedgeworth was kept out via the bar by Phillips. The ball fell to Ronald Sobowale who's shot was blocked, then to Corey Holder who also saw a defender get in the way of his effort. Phoenix took the lead in the 21st minute. McCarthy had a rush of blood charging out of goal towards the right wing, but ex Leafe striker Lauris Chin was always going to get to the ball first and his cross found Harry Harding who had the easy task of shooting into the unguarded net.
Holder headed wide from a Wedgeworth corner in the 25th minute, and 2 minutes later at the other end, Chin was clear but McCarthy was quickly out to block his shot. Leafe's equaliser came in the 31st minute. 2 Phoenix defenders were shepherding  the ball out of play but Matt O'Donoghue was determined to keep the ball in play, and having won it, found Corey Andrews in the box, who was brought down and a penalty awarded. Sobowale's firmly struck spot kick gave Phillips no chance.
Both sides had a couple of further chances in the half but a 1-1 score line at the interval was a fair reflection of the game. Leafe were unlucky in the 49th minute when Wedgeworths' free kick from wide on the right curled and dipped to hit the bar. Another close shave for the visitors in the 57th minute when Sobowale beat 2 defenders and shot across the face of goal, hitting the inside of the post, but the ball rolled back across goal into the grateful arms of Phillips.
Phoenix then had 2 great chances both falling to Harding. Firstly in the 66th minute he was clean through with just McCarthy to beat but inexplicably sliced his shot well wide then 2 minutes later found himself in the clear again. McCarthy blocked his first effort then following up, shot wide. Leafe got the winner in the 75th minute. The hard working O'Donoghue, who had been instrumental in getting Leafe's equaliser, now got the assist for the winner with a pin point cross that found Andrews and his first time low shot into the net wrong footed Phillips.
There was a long delay when a serious injury lead to Zak Byron being stretchered off and 9 minutes stoppage time was indicated and this turned into 11. Phoenix had 2 chances to equalize in this period. Harding again had a chance which McCarthy tipped past the post. The visitors did manage to head the ball into the net deep into stoppage time but it was ruled out for offside.
Whyteleafe: McCarthy,  O'Donoghue, Wedgeworth,  Campbell, Thompson, Holder, Mensah, Graham, Sobowale (Sutherland 90+6), Walker-Barth, Andrews. Subs not used Aziz, Daley, McGeoghegan, Olurunnisomo.