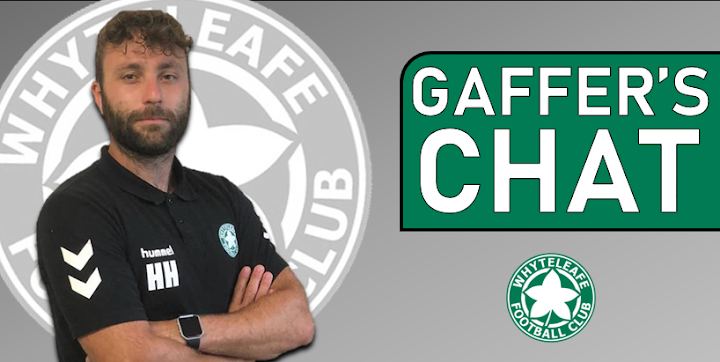 Welcome to the latest edition of Gaffer’s Chat. Despite the first matches being played behind closed doors, all of a sudden we’re four games into pre-season (two wins, a draw and one reverse) and we’ve just had the Extra Preliminary Round draw for the FA Cup, so let’s catch up with Leafe boss Harry Hudson and find out his thoughts so far.

Harry, lots of games to talk about. We’ve gone from starvation to feast in just a few weeks. Great to be back playing again though? Let’s start by talking about the opening pre-season fixture at home to Hollands & Blair of the SCEFL Premier Division. A 3-0 defeat and a disappointing result?

Yes, it certainly was – pre-season always throws up some interesting results but three individual errors cost us – a day to forget.

You missed the H&B match, but you were back for the next game when we entertained your old club, Croydon FC. That was a better performance all-round resulting in a 2-0 victory. Your thoughts on that one, please?

Yes, we were improved and started to show some of the patterns we have been working on. We also missed a pen at 2-0 and I think that gave them a lift. Croydon will do well this year though I am sure.

Then we had a bit of a ding-dong at Church Road when we entertained Northwood FC (of the Isthmian South Central) and ran out 4-3 winners. Now that was a very good game and our visitors provided a proper test. You must have been pleased with that one?

What a crazy game of football! I was pleased with how the boys listened to information at half time and kept a clean sheet in the second half. However, in the first half, they caused us problems and we failed to deal with their threats. That being said we created tonnes of chances and could have scored seven or eight on the day which is pleasing.

Of course, we have to talk about it. The downside of that victory was a serious injury to Andrew Sesay. He has dislocated his shoulder I believe? That’s a blow and might mean an extended time out?

I'm delighted to say that it is better than we first thought – he will be touch and go for Glebe FA Cup match.

Sesay and Ryan Gondoh are looking like forming a seriously promising partnership upfront, too?

I think they could be up there with the best in the league in my opinion – if they get the service we will cause teams problems.

Playing behind closed doors must have been weird? I know from talking to you on Saturday that you and the boys we really looking forward to seeing the fans last Saturday against the 'other' Croydon - AFC Croydon Athletic?

It was strange but it really was great to hear and see the fans on Saturday – fingers crossed it continues.

Early days yet, but looking at positives, who has pleased you with their performances so far?

We are creating chances and look a real threat going forward. We need to adapt defensively and bring in a couple of recruits to finish us off but if we can get that side of the team right we will have a good chance.

I have got to hand it to you and Cal, you have the magic touch when it comes to un-earthing new talent. Fair to say that Ethon Archer and Courtney Clark (both 17 years old, I think) have prodigious talent? Tell us a bit more about them. The Leafe fans are going to love those two?

Courtney (CJ) is 17 and has come through our Academy programme. He is an industrious box to box midfielder who has excelled in recent weeks – he has a very bright future ahead of him and I wouldn’t be surprised if a professional club snaps him up really soon.

Ethon is 18 years old and has just completed two years with us but his development in the past 12 months has surpassed anything I save ever seen in football. He is a creative midfielder who has a real eye for a goal.

Your Manager’s player of the season, Ricardo Thompson (another fine young man) seems to be relishing his new role sitting just in front of the back four? That’s an ideal slot for him, right?

Ric is one of the most dependable and versatile players I have ever worked with! Wherever we play him he seems to excel!

Also, everyone’s favourite, Helge Orome seems to be taking to his new midfield role too?

Helge is so important to our group and he is a real role model for our younger players. He ain’t a bad footballer either!

Any news on when another fans favourite, Mannie Mensah might be back from injury?

We are hoping for the Glebe match but will be touch and go.

Finally, we had the FA Cup Extra Preliminary round draw on Tuesday (August 18) and we have a trip to Chislehurst to face Glebe FC of the SCEFL? What are your thoughts on that and the draw?

Glebe have made some excellent signings and really seem to be going for it this season so it is a tough draw. However, we don’t fear anyone and will be travelling there to take the game to them!

If we come through the Glebe fixture we will then entertain either Bearsted FC (of the SCEFL Prem) or Peacehaven & Telscombe (of the Southern Combination) and although both of those are a level below us you won’t be taking either of them lightly? I know we beat Peacehaven 6-0 in a pre-season game a year ago, but as we all know, a lot can happen in twelve months!

One game at a time! Let’s focus on Tuesday and go from there Steve!