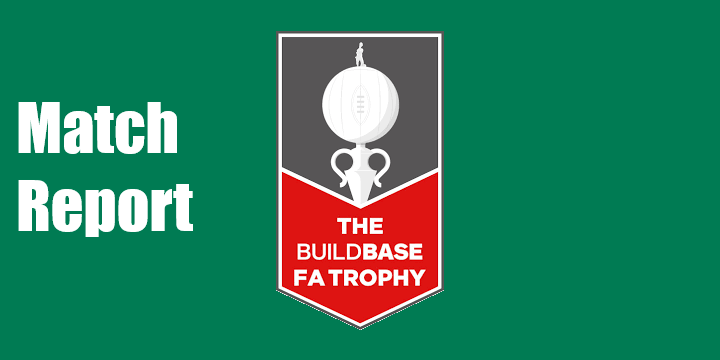 A visit to Buckinghamshire awaited us in the FA Trophy 3rd Round Qualifying. The journey up there started having similarities of our last trip to the same county when our game with Burnham was postponed due to a waterlogged/unsafe pitch just over an hour before kick-off. Chesham United tweeted at 1pm that some wet patches on the pitch were being worked on and the match going ahead would be dependent on whether the rain got any worse so when the clouds opened up and a sudden downpour began, it was starting to be "WITCHful thinking" (Sorry I had too, it was Halloween after all) this one was going to go ahead. But luckily the shower didn’t last too long and after a great effort by the Chesham groundsman on the pitch, the game was confirmed as good to go. 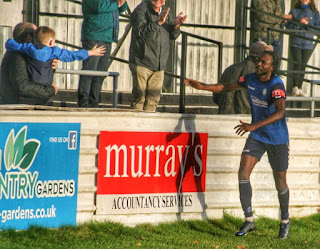 (Aaron Watson celebrating his goal)
The starting lineup was unchanged from the great midweek win against Burgess Hill Town. The game got underway with the rain forgotten about as we now had a blue sky and the sun out. Whyteleafe started well and in the 8th minute, took the lead through Aaron Watson. Ryan Gondoh showed quick feet and a bit of skill to get past the Chesham defender pulling the ball back to Watson who found the back of the net with a clinical finish. Few minutes later, more good work from Gondoh and his pass across the box found Omari Hibbert, who forced the goalkeeper into a save who was quick off his line to push the ball out for a corner which came to nothing in the end. The home side started applying a bit of pressure, first a shot from the right edge of the box brought a save from Tyler McCarthy in the Leafe goal then a decent looking ball was crossed back in but was caught very well by Tyler. 24th minute and Whyteleafe found themselves 2-0 up, Aaron Watson again with his 6th goal in just 2 games. The ball was won in midfield and it ended up at the feet of Watson who took the ball forward before finding the back of the net with a decisive finish. Chesham thought they had pulled a goal back in the 32nd minute when their number 11 Dave Pearce scored with a curling shot but the assistant had his flag up and it was given as offside. Briggs Ojemen was getting forward down the wing from left back, putting a decent ball into the box which unfortunately no Leafe player could get on the end of. A massive chance for Chesham in the 37th minute was put wide from a header two yards out. Leafe went into half time 2-0 ahead.

Chesham started the second half off with a goal within 2 minutes of the restart, ball played through and their number 10 slotting it home. The home side continued to look dangerous, Tyler McCarthy playing strongly to deny them an equaliser. 64th minute saw a penalty awarded to Chesham, no arguments from the Leafe players. The ball was put to Tyler’s left and he went the right way catching the ball in his hands quite comfortably.  Whyteleafe had a penalty of their own in the 82nd minute, this time it was the turn of the Chesham goalkeeper Sam Beasant (son of Dave Beasant) to save one, with Ryan Gondoh missing from the spot. Into the final 5 minutes of the game, a powerful header towards goal from Chesham saw Tyler once again pulling off a brilliant save which should’ve been enough to see the game out. However, with the last kick of the game in the 95th minute Chesham found themselves an equaliser. The game therefore went straight to a penalty shootout, which saw Leafe lose 3-2 and bow out of the FA Trophy for this season.

To see all of Matt’s photographs from Saturday’s FA Trophy match go to mattwhitefootballwanderer.com/saturday-31st-october/