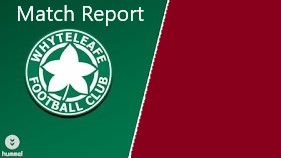 Church Road on Saturday saw the return of Leafe fans – a joyous occasion and a decent crowd for a pre-season friendly.
Although social distancing and track and trace policies are in operation and the requirement is for everyone to be sensible it was great to see fans back at Church Road. Thanks to those who stopped me for the kind words about the Gaffer’s Chat columns during lockdown. Much appreciated.
Anyway, Leafe’s fourth friendly of the mini season that are these pre-campaign friendly games. Our visitor’s on Saturday were AFC Croydon Athletic of the SCEFL Premier Division. In normal times, finishing second would have seen them promoted to our league this season, but as we all know these are un-precedented times.
Leafe boss, Harry Hudson and his assistant, Calum McFarlane continue their preparations for the forthcoming season and again on Saturday they took the opportunity to try out a few more potential signings to add to the squad members they already have.
With Jamie away and Corey Holder moving on to Sheppey United (we wish him well) it was a new look Leafe defence lining up on Saturday with Kayonn Wilson and the impressive Dami Olorunnisome at centre back. Young Dami has turned out in every defensive position during pre-season and has acquitted himself well in all of them.
Opening exchanges were very evenly matched and chances were few and far between. However, a free kick in the 35th minute, out on the right of the Leafe penalty box evaded everyone including the un-sighted keeper, Tyler McCarthy thus opening the scoring for our visitors.
Leafe recovered from the set back and began piling on the pressure but just couldn’t find the equaliser although it looked a certainty in the 44th minute following a chance for Courtney Clark.
Immediately after the break, Croydon really should have stretched their lead when it looked easier to score than miss. Shortly after another sustained spell of Leafe pressure almost resulted in a goal when the Croydon keeper mis-handled an innocuous shot, but although they huffed and puffed a combination of Ryan Gondoh and David Owusu just couldn’t get the ball into the net.
Leafe had clearly received a roasting from Harry and Calum during the interval and they were playing with much more intent and purpose. A superb run by Owusu set up his strike partner, Ryan Gondoh for a nicely taken equaliser in the 60th minute.
The traffic was one way by now but when Croydon did get a chance their breaks were dangerous. Harry Hudson received a yellow card in the 63rd minute showing just how intense it was becoming.
Leafe fans felt sure a winner was coming and in the 70th minute a lovely defence piercing pass from Gondoh saw Owusu break away with the Croydon defence trailing. Spotting the keeper off his line his chip squirmed agonisingly past the post, kissing it as it went!
With Leafe dominant, a neat Croydon move against the run of play seemed certain to snatch victory, when one of their forwards fired off a shot that looked destined for the bottom right hand corner of the Leafe net. However, although he didn’t have that much to do, Tyler McCarthy produced a lovely save to turn the ball away for a corner.
A good game of football and a 1-1 draw with Leafe shading it. Harry’s men are next in action on Thursday evening away to Beckenham Town FC from the SCEFL. Feels great to be able to say, kick off is 7.30pm – SEE YOU THERE.