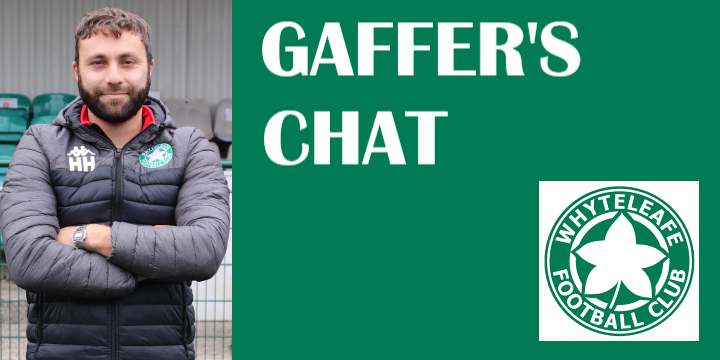 As Leafe fans we never take things for granted as we all know how quickly things can change in football (not to mention life, in general!) but time, I think, to take a gentle look back at the first seven competitive league and cup games with Leafe boss, Harry Hudson. Seven wins is a great start by any measure, but sure enough bigger and sterner tests are just around the corner. Literally.

STEVE HOLE sits down for a quick catch of breath with Leafe gaffer Harry Hudson to take stock of the first five weeks of the season and to get his thoughts on team performance and results in general.

Harry, we’ve been doing Gaffer’s Chat for three seasons now and we’ve discussed many things - high points and unfortunately some real lows, too, but this week is a joyous one to do.

Knowing you like I do, though, you will be delighted with seven straight wins BUT you won’t be counting chickens yet … two tough tests over the coming seven days which we’ll discuss in a minute. However, give me a round-up of how you view the team’s performances, in general during those first seven matches?

We have to be pleased with the start no doubt! Alongside the results our performance level has been high and that is really what we look for. We need to improve our conversion of opportunities though which is something we will look at this week in training. We have failed to kill teams off in recent weeks which can sucker punch you if you are not careful and that is exactly what nearly happened against Chichester.

Firstly, FA Cup business. A frustrating last-minute postponement on Saturday, but there was no Burnham’s pitch was playable – or for the foreseeable future, for that matter - surely?

Absolutely. When I arrived, I was surprised at how bad one section of the pitch was. The guys at Burnham really tried everything they could to get the game on and that is admirable, but they were fighting an uphill battle. It is always frustrating to travel when games are called off and Saturday was certainly one of those occasions.

I hear that you made a positive out of the postponed game, though?

I got the chance to watch one of our next opponents which was relatively local to Burnham’s ground near Maidenhead, so every cloud and all that!

The FA Cup match was played at Church Road on Monday evening, of course and despite a valiant effort from Burnham FC, we won 3-1. Am I right in thinking that was the first time we’ve been behind this season, so far? You must have been pleased not only with the result but the way the team worked out how to break down a stubborn Burnham’s game plan?

Yes, we had to show character to come from behind on Monday, however the manner of their goal we feel was unacceptable. After they scored though we were in control and should have killed the game off much earlier than we actually did. We stuck to our principles and continued to probe and we finally got our just rewards. It also doesn’t help that we had what looked like two stone-wall pens turned down and a goal disallowed for a very debatable offside.

Wasn’t it a great atmosphere at Church Road, though, Harry? The Leafe fans were brilliant – AGAIN?

Outstanding atmosphere! The fans this year seem to be even louder than usual! It was a shame we couldn’t get the 3rd earlier and really given them something to enjoy!

That result sees Concord Rangers heading our way next Tuesday evening (October 13 – 7.45pm). You took us on an unforgettable FA Cup journey last season mate, but you’ve gone and done it again! Another day that will go down in the annals of Leafe’s history. You like the FA Cup, right?

It is certainly a competition we have a good record in, and we will be looking for that to continue on Tuesday.

I also have to be honest and say that in the past two seasons we have had favourable draws in the competition, but our boys have stayed professional throughout and got us through.

We very much look forward to hosting Concord Rangers and we will be pushing for an upset, for sure.

It’s going to be a real occasion at Church Road on Tuesday evening. Another visit from a National League South side (Chippenham Town last season) is pretty special for everyone at the club. You are under no illusions as to how tough it will be though?

Of course, it will be difficult, but all the pressure is on them and not us. Anyone who watched the Chippenham game last year will know that on the day the result could have been very different. We will be looking to go one further on Tuesday get ourselves into the next round.

You seem to really enjoy pitting your wits against managers and teams you don’t normally face in the league, especially when they are higher up the pyramid? You thrive on that sort of stuff as a coach?

It is enjoyable when we get to face tactical battles and we hope that will be what Concord will bring on Tuesday.

Not really wishing to single out any players as everyone has been putting a shift in but how well has Helge Orome taken to the captaincy role? Cajoling and encouraging, while mentoring the youngsters. He’s thriving in midfield, too. Who knew!

I agree, Steve, Helge has been exceptional both on and off the pitch – a Rolls-Royce of a centre midfielder!

Before, Concord Rangers arrive in our village there’s another mega test coming this Saturday (Church Road – 3pm) when we entertain Cray Valley PM. They are many people’s favourites for the league this year and you rate them highly, I think? That should be a great game?

Yes, I think Cray and Hastings are favourites for the league this year and we always look to relish the big games – Saturday is no different. We are in great form though and will not fear anyone so bring on Saturday!

Finally, did everyone get through the cup match unscathed? No injuries for Saturday? How is Andrew Sesay’s shoulder? Any idea when he’ll be ready for selection?

Sesay will be back available this week and we will need to monitor some knocks from Monday but hopefully we should be full strength. UP THE LEAFE!